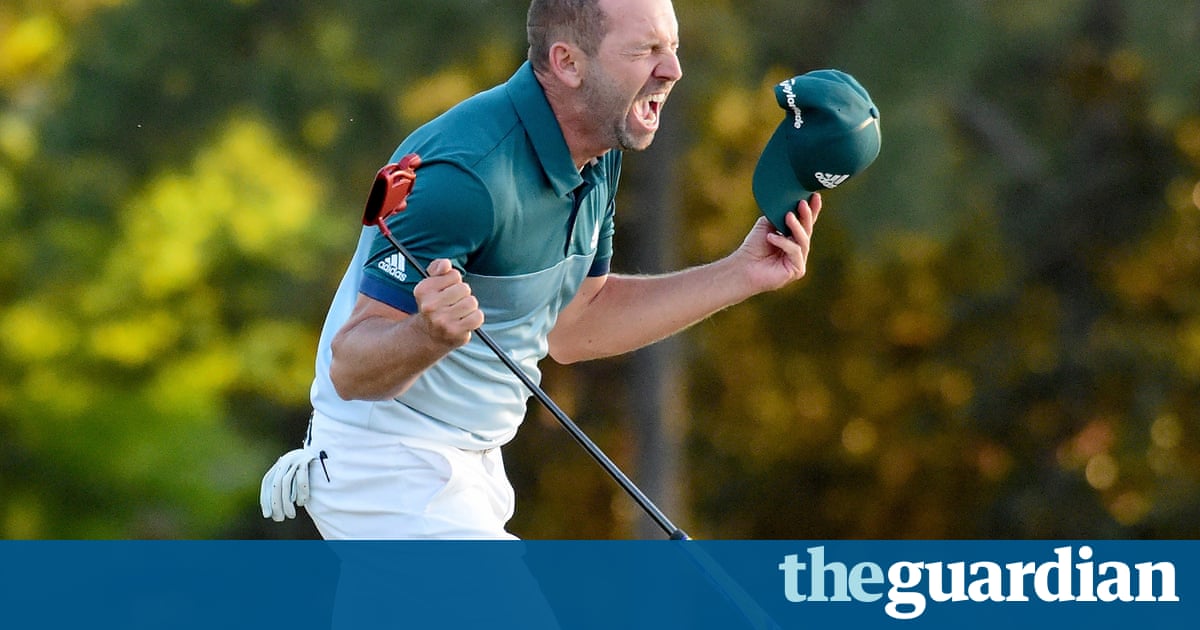 On reflection it was wrong to say we had been waiting for this since 1999. It was not a thing in 1999 at all. When the precocious 19 -year-old charmer Sergio Garca announced himself by fabricating a six iron to the green from behind a tree at that years US PGA Championship, sprinting up the fairway after it, then operating Tiger Woods close in a near-miracle at Medinah, it was simply assumed he would go on insouciantly to gather up armfuls of major titles just like Tiger. But it did not work out like that.

Since then Todd Hamilton, Ben Curtis, Shaun Micheel, Rich Beem, Geoff Ogilvy, Lucas Glover, Stewart Cink, Webb Simpson, Trevor Immelman and Mike Weir have won majors fine players but none possessing the innate flair of Sergio. Ah well, the nature of golf. But no wonder Garca at one point mentally gave up the ghost, publicly declaring he did not possess the moxie to get the job done.

The warning signs started to flashing at the 2007 Open. Sergio played the third round at Carnoustie, during which he established a three-shot lead over Steve Stricker and a six-shot advantage over Padraig Harrington, in garish amber and red. The Ronald McDonald aesthetic was a harbinger of events to come. Our Pulitzer-winning fourth-round hole-by-hole report started with a checklist for Sergio: 1. DO NOT WEAR AN ALL-YELLOW OUTFIT. 2. DO NOT COCK IT UP LIKE A CLOWN. PLEASE. He complied with part 1 at the least, sporting a tasteful lime-green top with white trousers. Our live blog finished with a resigned sigh: Oh, Sergio!

To be conscientiously fair, Sergio had not cocked it up like a clown at all; it is just very hard to win a major championship. Our blog also details the eventual winner, Harrington, virtually throwing it away himself, dumping his ball into the burn at the 18 th while nervously chomping on his tongue like hed just ingested a huge pouch of speed.

But Oh, Sergio! would become a recurring weep through the years, a refrain seemingly designed to be sing forever and never fade away, like the coda to Hey Jude.

Sergio was disqualified for signing an incorrect scorecard at the 2007 US PGA. A year later at the same event he found water at the 16 th while leading; his nemesis, Harrington, prevailed again. At the 2014 Open he chased down the leader Rory McIlroy, taking advantage of a huge break which ensure him slice an iron deep into a grandstand only for the ball to clatter back on to the apron of the green, from where he scrambled par. But he gave up on a splashing from a bunker at the 15 th and another race was operated. Hes visibly deflated, staring at the floor , noted research reports. Can you assure hundreds of thousands of yards past the floor?

The Masters that year was special, too. He shot an opening-round 66, the big teasing, and in a brazen effort to tempt fate in his favor, the fool who helms these hole-by-hole reports introduced Sergios Official Masters Meltdown-o-Meter, designed to gauge his current state of mind. A was happy Sergio; B seemed somewhat pensive; C pictured our hero kicking off his shoes, flinging clubs and( artistic licence here) kicking a cat in a fit of impotent pique.